The Confederation Line East is one of the three major extensions to Ottawa’s light rail transit system and will see LRT continue from Blair Road to Place d’Orléans and go all the way to Trim Road. 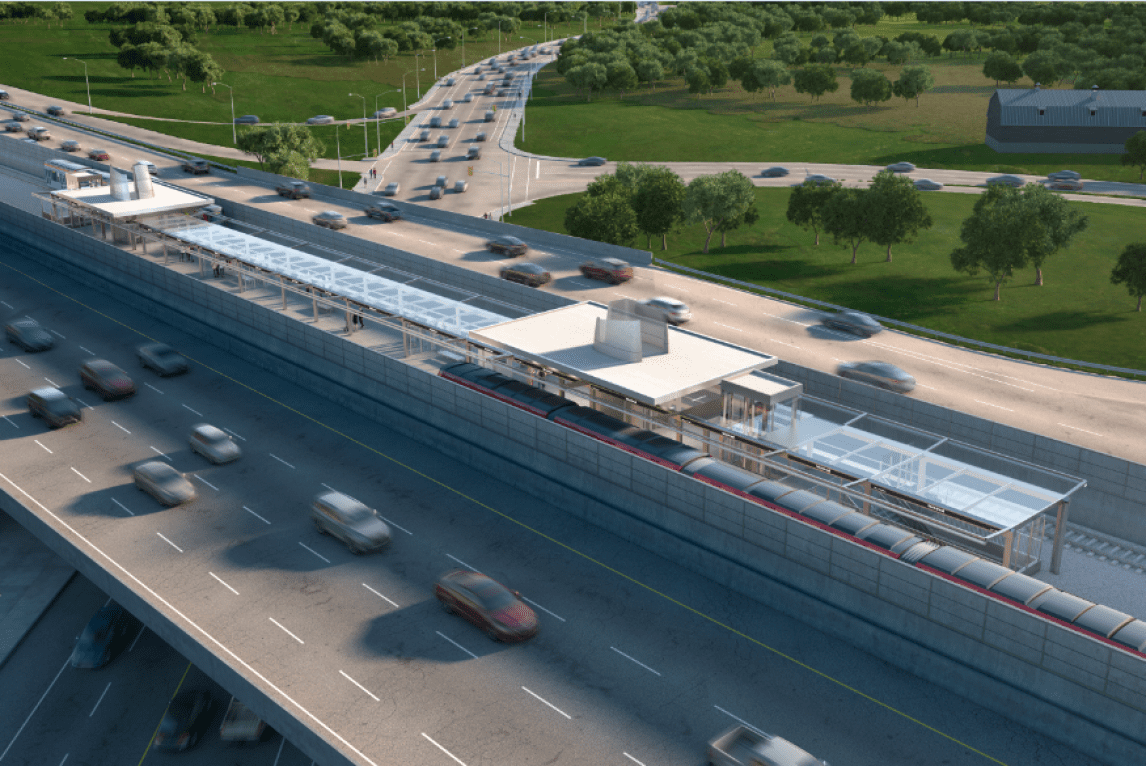 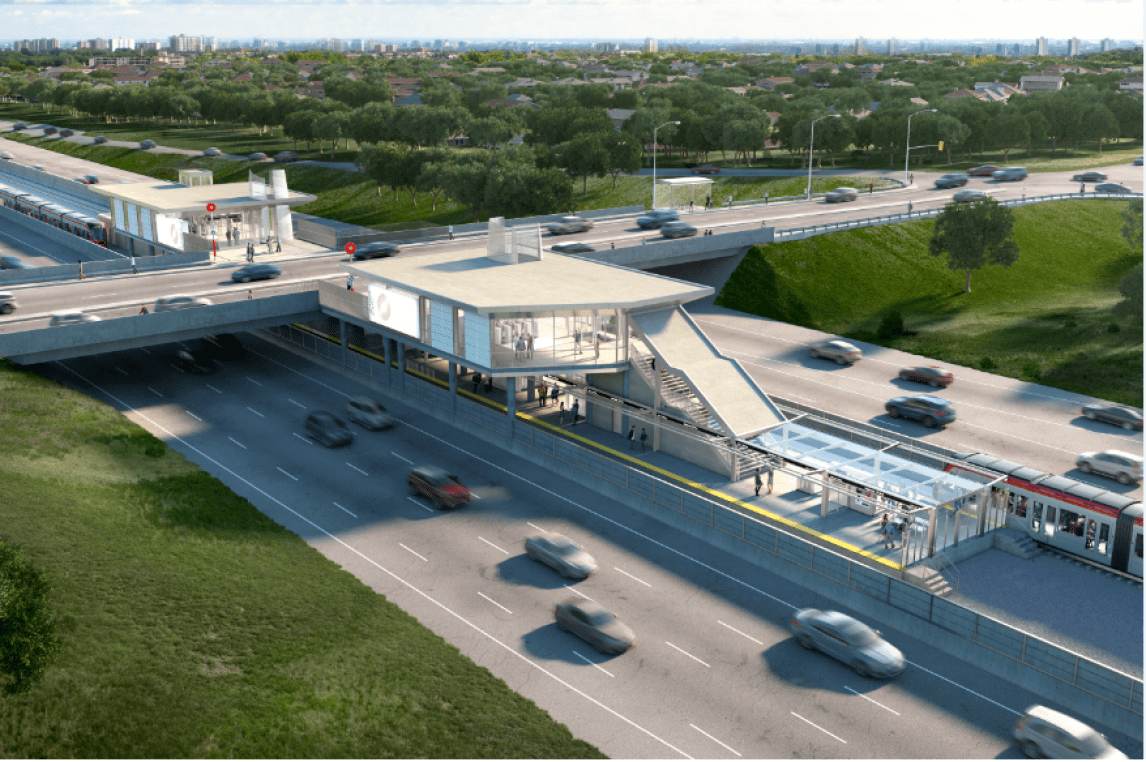 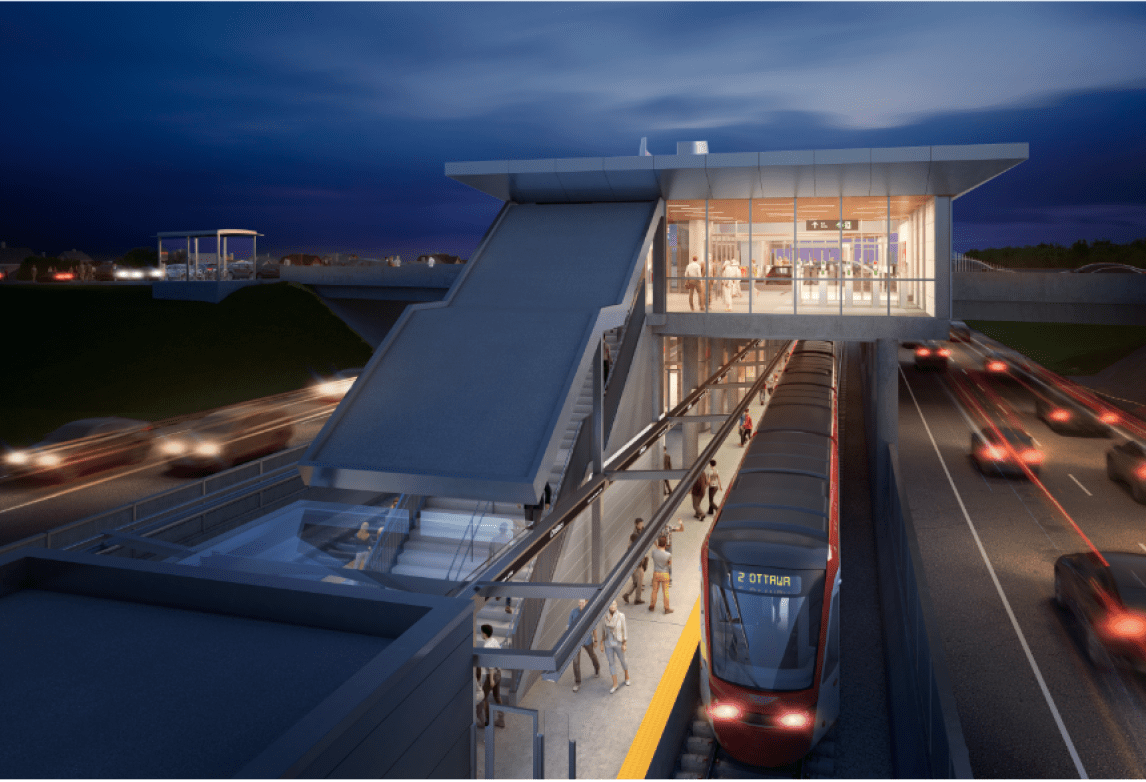 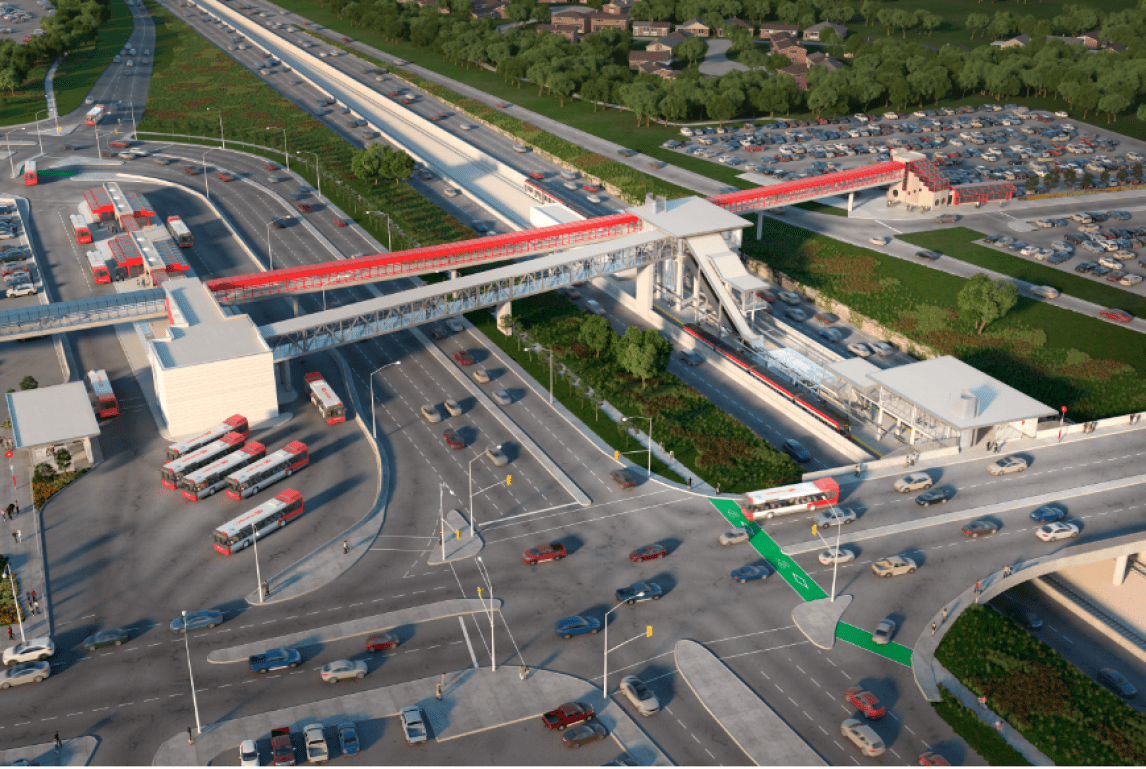 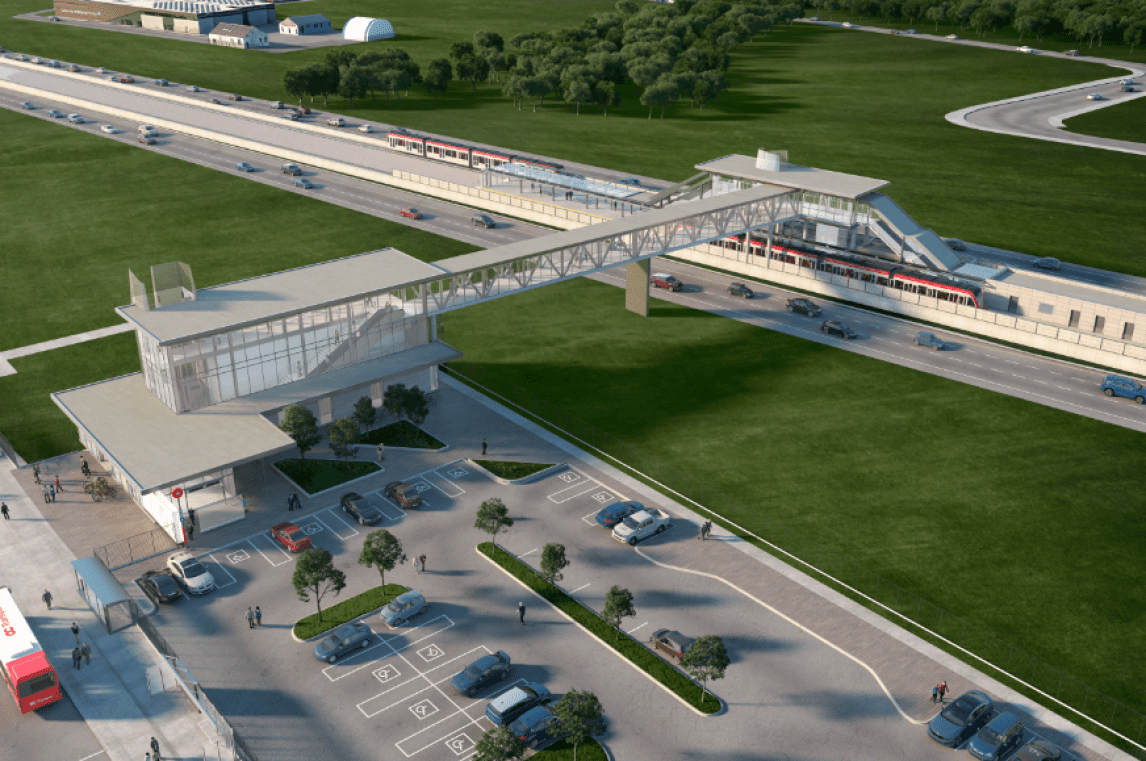 Stage 2 LRT will forever change how we move in our city. With 44 km of rail and 24 new stations, 75% of residents will be within 5 km of rail.

This year, crews continue to advance the project. Check out some exciting milestones they’ve met:

The City of Ottawa hosted Reece Martin, of RMTransit, to take a peek at progress being made across the O-Train East-West Alignment. Check out his latest video on Stage 2 LRT construction here.

Crews have successfully dismantled the Blair Transitway bridge, advancing the Stage 2 LRT project! This work allows for the future connection of Blair Station to the new Blair to OR 174 median rail bridge.

Check out this video to watch the bridge come down!

On April 26, 2022, Mayor Jim Watson and Transit Commission Chair Allan Hubley joined the Honourable Mona Fortier, President of the Treasury Board, on behalf of the Honourable Dominic LeBlanc, Minister of Intergovernmental Affairs, Infrastructure and Communities, and Marie-France Lalonde, Parliamentary Secretary to the Minister of Immigration, Refugees and Citizenship and Member of Parliament for Orléans, representing the Government of Canada, to celebrate the start of track installation on the O-Train East Extension. This is a significant progress milestone for Stage 2 LRT.

The O-Train East Extension will travel mainly within the OR 174 median, between Blair Road and Trim Road, adding 12.5 kilometres of new rail and five new stations. The extension connects 95 percent of residents in the communities of Orléans, Blackburn Hamlet and Beacon Hill within five kilometres of rail.

Construction on the O-Train East Extension is well underway, and all 25 kilometres of track installation will be complete by the end of 2022. A 240-metre test track west of Jeanne d’Arc was installed in December 2021, and the main line track installation began in April, near the future Jeanne d’Arc Station. Construction of all O-Train East Extension stations are in progress.

Stage 2 LRT will transform travel in Ottawa as it expands the reach, comfort and convenience of light rail transit. It will connect communities, as well as Ottawa’s major employment centres, postsecondary institutions, shopping and recreation destinations, and arts and culture hot spots. When Stage 2 is complete, LRT will ultimately be capable of carrying 24,000 people per direction per hour at peak capacity. The O-Train network will relieve congestion, reducing approximately one sixth of Ottawa’s total vehicle kilometres travelled and save commuters time and money. The project will also reduce greenhouse gases by 110,000 tonnes and contaminants such as carbon monoxide, nitrous oxides and sulphur oxides by 3,000 tonnes over a 25-year period.

The Stage 2 Light Rail Transit Project is a $4.66 billion project, jointly funded by the Government of Canada, the Province of Ontario and the City of Ottawa. Stage 2 supports healthy transportation, gives residents more options for how they move around, including biking to destinations. Ottawa is integrating the city’s pathway network with all light rail developments in support of mixed-mode travel.

Check out the progress throughout 2021 on all three extensions! The east line is towards the end of the video

The Stage 2 team continues to make progress across all three O-Train extensions! The Stage 2 project continues to achieve construction milestones and has resulted in more than $550 million worth of contracts to local vendors. Check out the progress below.

The O-Train East extension will see LRT continue from Blair Road to Trim Road, adding 12.5 kilometres of rail and 5 new stations to the O-Train network at Montreal Road, Jeanne d’Arc, Orleans Boulevard, Place d’Orleans, and Trim Road. The east extension will travel predominantly within the median of OR 174.

One of the critical objectives in 2020 was the relocation of infrastructure, including various utilities such as sewers, hydro lines, watermains, natural gas and telecommunications infrastructure in the Highway 174 corridor at Green’s Creek, Jeanne d-Arc, Orleans and Champlain Street to set the stage for the future track and station construction in the median.

Significant ramp modifications occurred at the Jeanne d’Arc Interchange where vehicle access to Highway 174 has been changed. The existing westbound on-ramps were removed and the southbound and northbound lanes of Jeanne d’Arc Boulevard now have signalized right turns. This will help reduce speeds and increase safety for all road users and create greater connectivity for all modes of transportation.

Further to the critical utility relocation work and road preparation work between Trim Road and Jeanne D’Arc, travellers along the 174 will have witnessed significant and intensive construction activity between Blair Station and Montreal Road. In order to connect trains from the existing transit alignment on the north side of the highway into the median itself, a new dedicated rail bridge is being constructed 800m east of the Highway 174 and Blair Road interchange and the existing bus transit bridge, south of Trillium Park. Crews have been hard at work constructing the pier caps that will hold the future Blair Station to 174 median rail bridge. From there, trains will travel east to the final stop at Trim Road where the Stage 2 team has been renovating the existing OC Transpo Park and Ride facility and building a future Highway 174 eastbound, north and south ramp required to make space for the realignment of Trim Road and the construction of the future Trim Station.

Over the course of the year, eastbound 174 lanes had to be shifted south and two new bridges had to be built at the Highway 174 Montreal Road interchange to create enough space to allow work on the guideway and station construction to begin. In November, crews worked over five weeks and weekends to detour traffic from the existing highway bridges to the two new bridges with minimum closure time and impact to the travelling public. This work was critical to enable the demolition of the existing bridges over the course of the first weekend in December and the start of the deep foundation for Montreal Station in 2021.