Home > Events > Stronger together: Ottawa Board of Trade and Heart of Orléans BIA co-host breakfast event and Councilor panel

Stronger together: Ottawa Board of Trade and Heart of Orléans BIA co-host breakfast event and Councilor panel 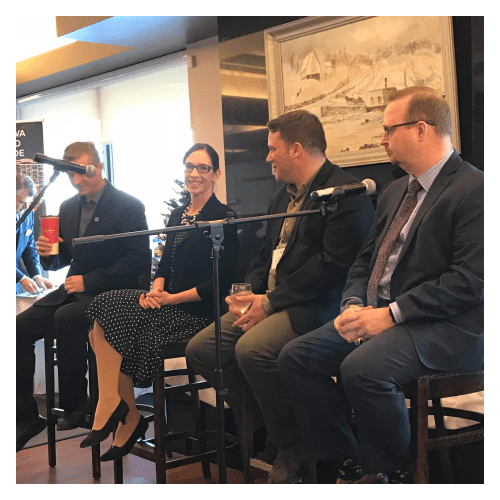 A big shout out to Ottawa Board of Trades. An article that was published in the February 2019 issue of the Beat:

In December, the Heart of Orléans BIA was part of an exciting breakfast event which included two major presentations: one was from the Ottawa Board of Trade President and CEO and the other was a panel of the newly elected councilors from the area.

As you may know, the Orléans Chamber of Commerce, the Ottawa Chamber of Commerce and the West Ottawa Board of Trade amalgamated into one single organization called the Ottawa Board of Trade in 2018. The goal was to create the single largest voice of business in Ottawa and the organization now represents over 1,200 members and 30,000 employees from multiple industries and works for for the economic prosperity of Ottawa through advocacy, dialogue, and connections.

He shared information about the organization, especially regarding its advocacy priorities (see pull-box) many of which are very important to Orléans’ ongoing development, especially those regarding job development and transit. He encouraged business owners to get involved with the new Board of Trade noting the range of networking, advocacy, and professional development opportunities available.

Then, a panel of our four newly-elected Ottawa city councilors presented their vision for the future of the east end of Ottawa by responding to specific questions directed to them by the Ottawa Board of Trade. The councilors included Laura Dudas, Matthew Luloff, Tim Tierney, and Stephen Blais. Each of the councilors expressed their commitment to work together as a team to ensure the east end’s needs are being met. Laura asked the assembled audience of business leaders directly, “What can we do to support you, especially now during the budget consultation period? How can we help you develop more jobs and attract more business to the area?”