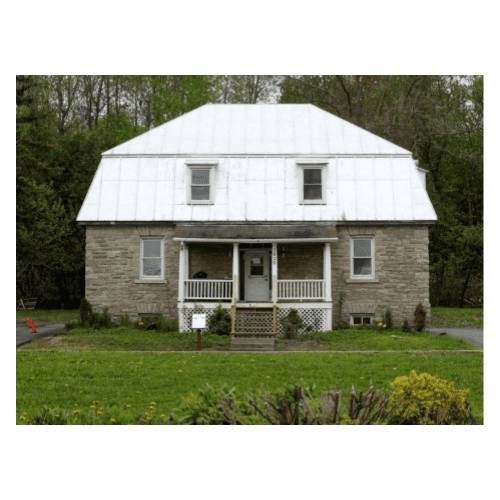 Have you ever noticed the unique stone building at 1820 St-Joseph Boulevard? This one-and-a-half storey, stone structure constructed between 1900-1908 was once used as a storehouse and flour mill for the Youville farmhouse located at 1811 St-Joseph Boulevard.

This interesting building is known for its association with the Sisters of Charity, also known as the Grey Nuns. The Order of the Grey Nuns was originally based in Montreal and founded by Marguerite d’Youville in 1737 to help those in need of medical or social services. Several decades after the order was established, Elisabeth Bruyère was asked to set up a community of the Sisters of Charity in Bytown.

In 1885, the Grey Nuns purchased 500 acres of farmland that stretched to the river and was just west of the village of Orléans. It was originally owned by the Besserer family. The Grey Nuns farmed the land so they could supply fresh produce to the Mother House in Bytown.

In the early 1900s, the storehouse was converted to a residence for families working on the farm. Early residents included Herménégilde Boileau, a miller, and Donat Lemay. From 1935 to 1944 Onésiphore Lemay (brother of Donat) and his family lived in the home.. Following this, other French-Canadian families lived there including the Parent, Potvin, Lacasse, Raymond, Blanchard, and Guérard families.

The dwelling at 1820 St. Joseph Boulevard is one of the few remaining buildings that serve as a reminder of the agricultural history of Orléans and the historic rural character of the area. The building is currently an office for the National Evangelization Teams Ministries of Canada Inc., a religious organization that focuses on working with youth.

Sources: Heritage and Urban Design Services of City of Ottawa.