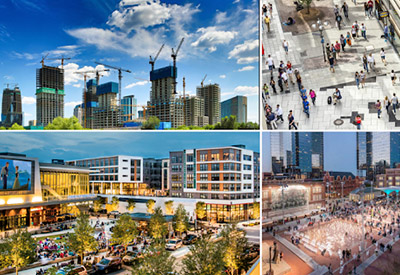 The Orléans Corridor Secondary Plan Study is being prepared to guide growth and redevelopment along the four new O-Train stations being built. In the next few years community members will be able to travel quickly and efficiently between the four new O-train stations and downtown to access work, to shop, to explore greenspaces, and to visit local amenities. This Secondary Plan is intended to guide the gradual evolution of the historic core of Orléans.

Secondary Plans are important planning tools that have significant influence on future zoning and development applications. The plan will provide updated and precise policy direction for growth and change. The Orléans Corridor study represents an opportunity for the community to work with city planners to implement bold new policies and concepts from the City’s recently approved Official Plan.

The new Official Plan was written based on Council’s “Five Big Moves” that called for more growth by intensification in areas serviced by transit; an emphasis on active transportation such as walking and cycling; more sophistication in urban and community design; the prioritization of environmental, climate and health resiliency; and, a continued focus on economic development.

There are three main ways in which the future Secondary Plan will guide the evolution of the St-Joseph Boulevard and the Orléans Corridor into an urban environment that reflects the 15-minute neighbourhood concept of healthy, vibrant, and complete communities.

First, the Plan will promote better connections between neighbourhoods to O-Train stations.

Second, the Plan will set the stage for significant improvements to the public realm. This will include plans to redesign St. Joseph Boulevard, new parks and privately owned public spaces, and the potential for buried hydro poles and wires.

And, the Plan will guide the introduction of taller mixed-use buildings on large land parcels closest to the stations.

Other important topics and themes in the secondary plan include intensification, built form that emphasizes appropriate massing and scale, complete streets and active transportation, high-quality public realm and parks, and resiliency with respect to climate change and challenges associated with marine clay soils.

The City’s planning department recently released some early policy ideas and plans to provide high-level guidance for future development. These plans are being considered now and deal with City’s future expectations for built form, land uses, and streetscape design. There are three key designations proposed that affect St Joseph Boulevard. They are the Orléans Town Centre, the Station Area Core, and the St-Joseph Main Street designations.

The Orléans Town Centre designation envisions changes to the town centre to make it a more vibrant transit-oriented suburban destination. The designation will provide for greater employment, shopping, entertainment, culture, and educational opportunities. It is here where the Secondary Plan will support a clustering of office and retail woven among mid-rise and high-rise buildings.

The Station Area Core designation will apply to areas closest to the future O-Train stations. Here there will be most opportunities for transit-oriented development of jobs and residences. People living and working here will have access to a diverse mix of shops, grocery stores, offices, restaurants, and financial and other services in a 15-minute neighbourhood. Following the principle of locating the highest buildings closest to the station, high rise development will occur in the Station Area Core designation with a gradual transition to lower heights in areas near existing neighbourhoods.

The St. Joseph Mainstreet designation will apply to properties along St. Joseph Boulevard where commercial activity currently exists, or where there is the potential for new buildings with street frontages that can contribute to an active and vibrant streetscape. This designation envisions the contemporary re-interpretation of Orléans’ unique mainstreet, that dates back to the community’s Franco-Ontarian village roots. Buildings will continue to be street-oriented commercial uses as they are now, but closer to the street and with the option of housing above.

Fewer changes are expected in existing suburban neighbourhoods in the Orléans Corridor Secondary Plan. These neighbourhoods however will benefit from enhanced streets and pathways that better connect to the new O-Train stations.