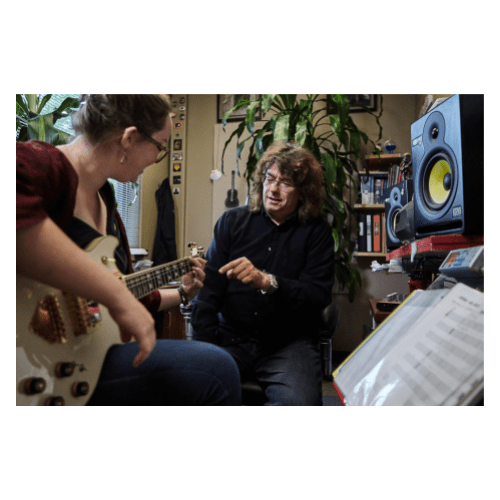 Music adds so much joy to our lives and, if you have ever considered taking up an instrument or learning to sing (or enrolling your child in lessons), MIFO’s music school in Orléans is the place to be – for so many reasons.

One of the most important things to consider when deciding to take music lessons is who your teacher will be. There are several teachers at MIFO; some of them are currently university students and others have decades of experience. Many of them are bilingual. Teachers need to be passionate about music, excellent players themselves, and have a style that suits your needs.

For example, Michel Foucault has been teaching guitar at MIFO since 1992 but he became a guitarist long before that.

“The first time I held a guitar in my arms, that was it. I knew what I wanted to do for the rest of my life,” Michel states.

After graduation from high school, Michel toured with bands across North America for several years. He studied at the Eli Kassner Academy in Toronto and participated in several advanced courses in France, including studying with Alexandre Lagoya. He has won accolades for his playing, too: in 1990, he won Ottawa’s Guitar Warz, and in 1998, he won a guitar competition sponsored by the highly-respected Guitar Player magazine.

By 2001, he had had enough of life on the road and turned to teaching. His depth of knowledge and experience and dedication to the craft make him an incredible teacher. His enjoyment of MIFO’s music school and its students is very apparent as he speaks about it. He says, “We have a lovely jewel in the east end of Ottawa under our ‘artistic umbrella’ here at MIFO.”

It’s nice to have that range to select from, especially if you, or your child, would like to get a grounding in a number of different instruments over time.

Each June, MIFO hosts a series of recitals so players – children and adults alike – can take to the stage and showcase what they have learned for an audience of family and friends. It’s a fun weekend event that takes place on the fantastic stage at MIFO.

There are some notable alumni from MIFO’s music school. For example, Victoria Powell graduated from the Music Business program at Belmont University in Nashville and works with Banner Music, making her career in the music industry.

There is a lot of research that links music to intelligence and academic achievement. Prowess in math, in particular, is associated with music as they both work with counting, patterns, fractions, and ratios. But higher marks overall have been connected to kids taking music lessons. That’s a pretty compelling reason alone to enroll your kids in music lessons.

“When you think of all distractions kids have in their lives, music is more important than ever. It is such an incredible tool that grounds them, connects them to their bodies, and also to their hearts and souls,” says Michel.

At MIFO, Michel has recently started “Rock Band”. You play in a group with other musicians and it is SO. MUCH. FUN. The program includes eight 30-minute private sessions and eight one-hour practices with the group.

Of course, any musical instrument is fun to learn and play. Your instrument becomes your companion and your muse, inspiring you in all areas of your life.

You might say, “But think of how old I’ll be by time I learn to play!” But remember: You’ll be the same age as you’ll be if you don’t learn to play.