Home > Events > Streetscape: A Look to Our Future

Streetscape: A Look to Our Future 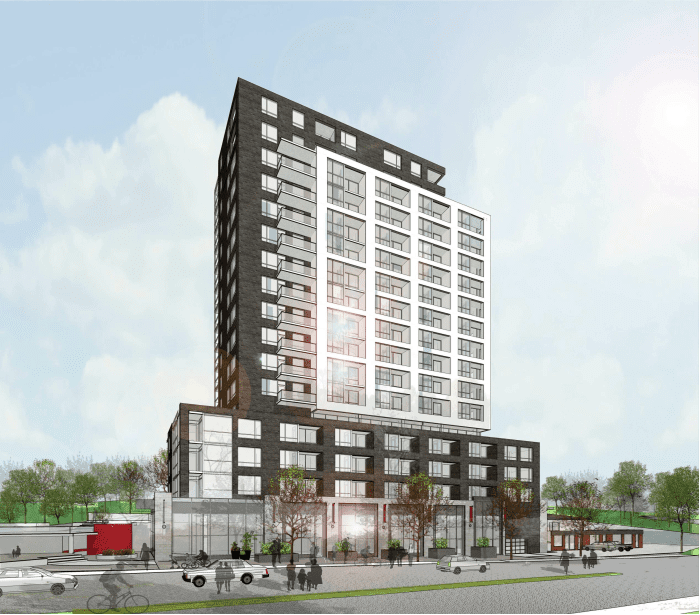 Developers behind the 16-story, mixed-use property slated for 3030 St. Joseph Boulevard are hoping their new addition will boost retail activity, become an anchor for the street, and pave the way for others to invest in the Heart of Orléans.

Situated only 400 metres from the future Place D’ Orléans LRT station on the north side, the transit-focused development will boast 165 units with only 80 parking spaces available for tenants. The building will also include 4,500 square feet of retail space on the ground floor, as well as an accessible outdoor space that will be available for public use.

Miguel Tremblay, a partner at Fotenn Planning + Design, the developer in charge of the project, says that the ideal tenant for the retail space would be a restaurant, but indicated that those details will be confirmed at a later stage. Tremblay says the group hopes to be in front of the city’s Planning Committee within a month or two and estimates that the project will be shovel ready in the next 12-18 months.

The developer had initially proposed 12 stories, but was amended to a taller and thinner design to improve sightlines and reduce the bulkiness of the building.

Acknowledging that there was some initial public opposition to the project, largely by the neighbouring Queenswood Heights community, Tremblay says east end residents aren’t used to seeing high rises in the community. This is something he’s hoping will change over time with the city’s ongoing 174 Economic Corridor Study and Secondary Plan refresh for Place d’Orléans.

“If you want to see retail flourish, like we’ve seen on Richmond Road and Wellington West, it will be due to condo injection and density,” says Tremblay. “With this development, you’ll have residential units right on St. Joseph Boulevard. You’re going to have people walking up and down the street. Farm Boy will become their local grocery store, for example.”

Tremblay says Councillor Matthew Luloff, who represents the ward that the property is located in, has been excellent to work with and applauds the rezoning initiatives that are being put forth by the city. “It’s really helpful to have the city at the forefront of these discussions.”

The city’s east end councillors have said they are working hard to maximise the economic opportunities being brought to Orléans by Stage 2 Light Rail.