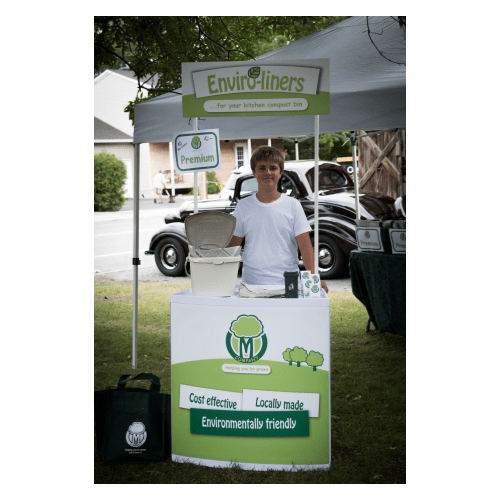 He began at only seven years of age and at the end of his first day pulling his wagon around the block making door to door sales, Matthew Rafter had $5, a popsicle, and a cookie. He was sold!

“This is a great business!” he exclaimed, waving his dripping popsicle with enthusiasm.

Fast forward nine years and M-Company now produces Enviro-liners, the  inserts for kitchen compost bins found in so many homes. The liners are made of recycled newspapers and can be transferred directly into the larger city green bins because the liners are also compostable.

Now, at the age of 16, Matthew has been leading M-Company for over half of his life. He has a team of 10 young teens committed to making an environmental difference. They meet on the weekends to fold and build inventory with all production taking place at M-Company Headquarters (a.k.a. Matthew’s family home).

Recently, M-Company was featured in a Facebook Gardening Group with over 11,000 followers. Orders were pouring in from all over the city and as far away as Connecticut, USA. Matthew was able to fill all the Ottawa area orders but had to call the American customer and explain the situation. “I told her that I was happy she was composting and that I’d like to help but Connecticut is outside of our delivery area.”

In 2018, Matthew was awarded the Young Entrepreneur of the Year Award by the Orléans Chamber of Commerce. He also received recognition from the Orléans Rotary Club with a Young People of Character Award. Most recently, Matthew was invited by Mark Kielburger to attend an event in Toronto aimed at supporting and kick-starting businesses for young entrepreneurs.

What does the future hold for Matthew and M-Company? Well, he’s still working his way through high school and currently has plans for multiple university degrees.