Home > Uncategorized > On “the beat” with Constable Marc Leroux

On “the beat” with Constable Marc Leroux 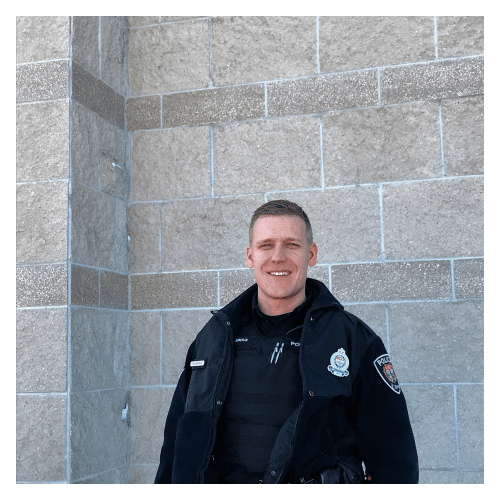 Did you know Orléans has its own community police constable? That’s right! Constable Marc Leroux works in the community to promote safety, to help prevent crime, and to build the community’s trust in law enforcement officers.

Constable Leroux does this through building partnerships and relationships, working closely with City of Ottawa Councillors, schools, and community associations. He is one of community police officers that serve our communities across Ottawa.

According to the Department of Public Safety and Emergency Preparedness, community policing is a philosophy that supports partnerships and problem-solving to pre-empt crime. Community policing is about prevention of crime rather than catching the bad guys. It’s almost impossible to count the number of crimes that didn’t happen so it’s difficult to get statistics about the effectiveness of community policing, but anytime bad things are prevented from happening… well, that’s a good thing!

That proactive and upbeat approach to policing attracted Constable Leroux to become a community officer in 2019, after four years as a school police officer and the previous nine years as a patrol officer, where he responded to calls for service such as assaults, thefts, impaired drivers, domestic violence, and collisions.

“There has been a lot of change in crime in the 13 years I’ve been in the Ottawa Police Service,” Constable Leroux states. “The most significant changes are related to cybercrime and social media. Any impact we can make at the community level on these, and other crimes, is important.”

Constable Leroux knew at a young age that he wanted to be a police officer as he has always enjoyed helping people out. Then, when his family’s home suffered a “break and enter” when he was 10, he knew without a doubt that this was his life path.

In high school, he participated in a coop program and had a placement with the police in Cornwall. Then, he attended Algonquin College and graduated from the Police Foundations Program. He started working in security and, in his spare time, he volunteered at The Mission and the Ottawa Catholic School Board. A few years later, he was offered a job with the Ottawa Police Service. Being bilingual, he was assigned to East Division.

“Fulfilling my lifelong dream of becoming a police officer is my career highlight. So, that means every day is pretty great. I love working in Orléans because the community is close-knit and it’s like a small town inside a large city – with all the advantages of both. I feel honoured to help people every day through community policing and playing a role in the crime prevention program.”

Constable Leroux points out that many community members do not know exactly what they should do when they would like to report something that is not quite an emergency and therefore they do not want to call 9-1-1. For non emergencies please call 613-236-1222. He recommends checking out ottawapolice.ca contact us  MAKE THE RIGHT CALL page. It provides guidance and helps make the decision about the right thing to do easy.

And, that’s all part of his job: Helping to make life better and safer for everyone in Orléans.