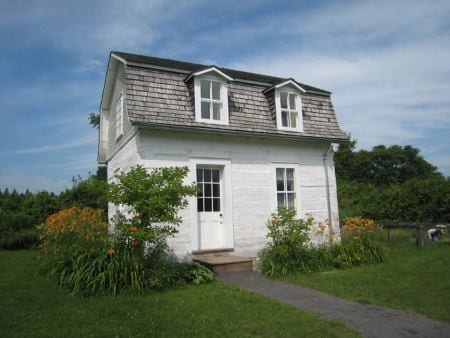 The next time you visit the Cumberland Heritage Village Museum, look for the little white house with a gambrel roof. This is the Dupuis House, and this was home to one of the settlers in what is now known as Orléans.

François Dupuis and his family moved to the area in the 1830s and built a home on St-Joseph Boulevard. François was a veteran of the War of 1812, having served at the Battle of the Chateauguay. François also acted as spokesperson with the first Bishop of the Diocese of Bytown (now Ottawa). This led to establishing a Catholic mission, which became the Parish of St-Joseph d’Orléans in 1860.

Éva Dupuis, a descendant, lived in this home from the 1950s until she died in 1983. Surprisingly, Éva lived there without running water or electricity!  In 1984, the house was relocated to the Cumberland Heritage Village Museum.

The Dupuis family name is still found here today. Dussere Street is across from the original site of the house, and pre-Ottawa amalgamation, it was Dupuis Street. The François Dupuis Recreation Centre in Avalon is named after this pioneer.