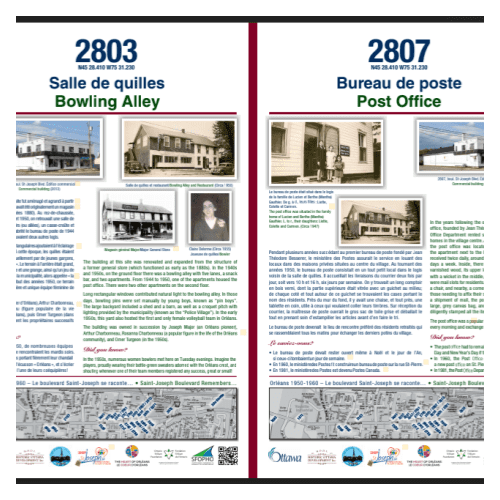 This is a year of so many unknowns and surprises but one thing is for sure: Our plaques program, in partnership with SFOPHO (Société franco-ontarienne du patrimoine et de l’histoire d’Orléans), is a wonderful addition to the Boulevard.

The city installed a new plaque this year, between the New Masjed and the former site of  Meatings. It commemorates the bowling alley that was housed on the ground floor of this large building in the 1940s and 1950s.

Back then the pins were placed manually by “pinboys” who were paid in tips as bowlers slid coins down the alley to them.

The back of the building was so vast that they played croquet and it was lit and named the “Police Village” by the municipality.

In the 1950s, women met on Tuesday evenings for league play dressed in their bottle green sweaters adorned by the Orléans Crest.

Right next door, at 2807 St Joseph Boulevard, Jean Théodore Besserer established the Orléans Post office in 1950. The mail was delivered not once, but twice daily – at 10 am and 4 pm. The post office doors were opened six days a week, even on Christmas and New Years Day for the convenience of  the residents.

The post office was a popular place for local retirees to meet every morning and exchange the latest village gossip.

Take a stroll along the Boulevard and discover more about this fascinating story, and many others like it, by reading the plaques placed in front of the landmarks that remind us of our history.